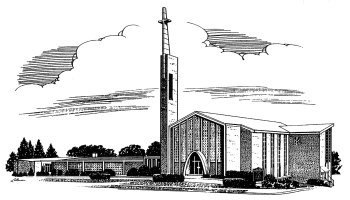 Why was St. Lukes Lutheran Church founded? How did it start and how is it still developing?

Saint Luke's Lutheran Church was incorporated on February 12, 1848. The Town Clock Church on Bedford Street was dedicated on March 17, 1859. That church was so named because the City Council of Cumberland offered a town clock to the first church completed by either the German Catholics or the German Lutherans.

The Lutherans won, largely because the women of the congregation held torches so that the men could work by night. The German Language was used in Saint Luke's worship services until 1920.

On June 5, 1927, the Saint Luke's congregation moved to a new home at the corner of Bedford and Columbia Streets. That Gothic structure served as both a sanctuary and an education building. Because of a lack of space at the Columbia Street location, the congregation decided not to expand at that site.

On Reformation Eve, October 30, 1957, the congregation voted to relocate to the present site on Frederick Street. The ground-breaking ceremonies on June 1, 1958, marked the 110th anniversary of the corner-stone laying of the original Town Clock Church. One year and one month later, on July 5, 1959, the corner-stone was laid. This handsome contemporary church was dedicated on May 1, 1960.

Our groups focus on certain organizational areas within St. Luke's Lutheran Church. Find out more about the areas in which the committees are active. Maybe you would like to get involved in one of them! To see a list of our active groups, click here.

Several committees are formed to support the functionality of St. Luke's Lutheran Church. To see a list of our supporting committees, click here.